A new turn of the wheel and new projects, or rather old projects that will continue in my case.
I hope that there will be snow at some point or we'll have had were a few days of nice snow. I need to see the white for a while so I can enjoy the new green when it comes it feels wrong otherwise. But there usually is some in January and February, it will just be a warm December. 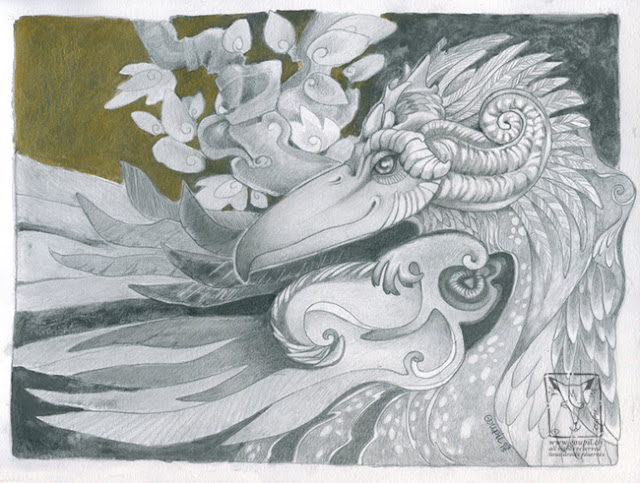 On Facebook, Terri Windling posted her answers to a meme created by Grace Nuth, and asked if other would answer too, so here is mine:

I should add that I consider anything as Myth that has had an effect on me at some point of my life regardless of tradition. So some answers may seem odd. And where I had so many choices I chose the names of those who have most influenced me all my life

-Who is your favorite living mythic artist?
Alan Lee. Wish I could say Barrington Coleby but he's gone now and yet not really in my past.

-Who is your favorite mythic artist from the past?
Aside from the obvious classics: Patrick Woodroffe also sadly gone now.
Fred, he still is one of my main influences in my Imaginary/Imagery.

-Who is your favorite living author?
Tim Powers

-Who is your favorite author from the past?
Tolkien

-What is your favorite Pre-Raphaelite painting?
Difficult one as it changed through the years. But most of John Everett Millais' works. His handling of light is amazing. How did he get that luminosity, and how did he manage such depth with no underpainting or washes?

But the one thing that moved me most, actually moved me to tears and that rarely happens with art; were the sketches and preparatory drawings by Dante Gabriel Rossetti. What incredible skills!

-What is your favorite fairy tale?
Baba Yaga. And one that my grandma told me all the time, one day I'll illustrate and publish it. About a bird who needs help but everyone ignores him because he's so insignificant.

-What is your favorite ballad?
Can't think of one so I'll name one graphic novel that can be considered a very long ballad and is one the the greatest mythic telling I've read outside of the classics : “Le Grand Pouvoir du Chninkel “ by Jean Van Hamme artwork by Grzegorz Rosiński. Van Hamme is the best storyteller I know of in graphic novels in general

-If you could go for a walk in a faerie wood with anyone, living or dead, who would you choose and why?
Well I have done this many times already. If I could meet one who is dead now and talk for a while I would choose Moebius, I never managed to meet him sadly. Alternatively, Jodorowski is still alive and the one time I saw him was a very amazing time. I would love to have a conversation with him

-If you were a faerie creature (and of course some already are), what sort would you be? (troll, pixie, etc)
Cat. And if you think a cat is not Faerie, you don't know cats.

-What item in your wardrobe makes you feel the most magical when you wear it?
Most accessories I wear, my waistcoats and wrist warmers, always.

- Who is a living artist who you feel isn’t as well-known as they should be?
Wow, there are so many. Not necessarily masters but great artists.
Sculpting and modelling: Ellen Jewett is starting to be known now. Evgeny Hontor.
Illustration : Emma Lazauki (Emla), "Bluefooted" on deviantArt ; SoMK; in fact look at my favourites on deviantArt some are just fandom based, but there are a lot of little gems (and I don't “fave” things as much as I used to now

Music: Eric Dover, Beasto Blanco
As an aside: I see Heavy Metal as my main source of inspiration nowadays and I really wish that one day I can demonstrate that, but for obvious reasons I can't just use music without permission. I use it directly at times and let the pen dance along to the music. I can never remember that term and I think it's because it's not representative enough, but some call it “stream of consciousness”. I yet have to come up with something that I like.

-What are some of your totem jewelry items that make you feel magical to wear?
Well, I don't wear much jewelery, but all of it has a meaning this is also why I started to make my own. I have my Dragon ring that I have had on my finger for 25 years now! One old model by Alchemy. And I still like my first Steampunk pendant

-What mythic or folkloric story resonates the most for you on a personal level?
I think I mostly answered that above? But I can mention one more because it's on my mind a lot lately and is influencing the story I've been trying to tell for a while now : “Dark Crystal”

-Studded jacket or fairy crown?
Ha, ha! I would look really silly with a fairy crown!

-Antlers or fairy wings (if you have to choose)?
Antlers

-You are getting sparkling strands in your hair that look like iridescent magic (Fhairy Strands). What color/s do you choose?
Purple

-You have just been given an all-expense paid trip to anywhere in the world, with the caveat that it must be a spiritual pilgrimage of sorts. Where do you choose to go?
Well, it's what I've done for most of my life. But I would love to see Iceland one day

-You have just been given $20,000, with the caveat that you must use it to support the work of artists you admire. What will you buy and by whom?
I always say that I'd create a fund to support artists who need time for a specific project.

-Faeriecon is celebrating its ten year anniversary next year. Imagine you are attending a big celebratory ball, and you have unlimited budget to create a costume. What will you wear?
A luxury version of my steampunk time traveller

-If you could have any author’s work turned into a television show that would spare no expense, what book or series would you choose?
I've never been keen on making movies out of books, it's never the same thing. But ok, I want to see more of Tim Powers' works turned into film. His book “On Stranger Tides” gave birth to Pirates of the Carribean... and don't get me started on this series as I would bore you with an essay about the symbolism, mythology and archetypes included in this amazing series of films!

-Who are your favorite children’s book authors and illustrators who you feel really capture magic?
Difficult one. Jiri Trnka was the first to catch my attention as a small child. Etienne Delessert. I try not to look at too many children books now as I don't want to be too influenced (I'm first an foremost a children books illustrator) I'd rather be influenced by other forms of art.

-What song do you feel best bares your soul?
Quite a few by Alice Cooper

-Name five singers/musical groups who feel like your own personal brand of magic when you listen to them.
Well, Alice Cooper (there's a surprise); Nightwish; Black Star Riders; Slash and his Conspirators and Beasto Blanco
It used to be a completely different list but that's what works now. There would have been Led Zeppelin, or Queen, Capercaillie, Runrig and such.

-You are given a choice: castle by the sea, or cozy cottage in the forest. Which would you choose?
Cottage in the Forest

-You go walking in an extremely magical area of nature and have an incredibly spiritual experience. What item of gratitude do you choose to leave for the spirits/fey/nature?
That will entirely depend of the type of encounter. Usually something handcrafted

-What grows or would grow in your enchanted garden?
Anything edible.

-If you were making Stone Soup, what ingredients would you ask for?
Start with water. Improvise.

-Who is your top mentor/inspiration in the creative arts you wish to pursue?
Barrington Coleby of course and John Howe are the main ones and Rodney Mathews

-Name an interstitial artist whose work is hard to put into one category, but who you think is phenomenal.
I suppose Patrick Woodroffe again. Also Black Frog

-For doing a favor for the King of Faerie, he offers you your own house fey. What sort of house fey do you choose and what would they do?
It would have to get along with Dragons. Ah just keeping the house clean (but not tidy) would be fabulous

-What quote best encapsulates your spiritual goals and beliefs?
Very loosely paraphrased : “ If you see your path clearly laid in front of you, it's probably someone else's” Joseph Campbell