Is it chicken or is it bacon?

I went to see a very interesting exhibition yesterday. Covering all periods from 1800 to present day. I must say I was more taken by the modern stuff. Apart from two Magritte originals that are always fascinating, nothing really caught my attention. Maybe one colourful painting very stylised.

I love modern art, people often hate it, but the same people rarely try to understand and just repeat the clichés. I like the fact that it inspires direct reactions and emotions. Sure I am a bigger fan of classic stuff, my favourites are Impressionists and earlier the Pre-Raphaelites. I am a big fan of colour harmonies and these periods had colours really singing.

One piece I really liked was the kind that will probably draw a lot of critique, a square painted blue... but with an arc of light (it was the title too) painted on. It was very strange, it had you look for the light source but you would be really confused if you did.

And then of course there are pieces I don't get, it's a matter of taste after all. But what always puzzles me most is seeing what I personally would consider as practice pieces. A musician will do scales daily, but not consider recording these for sale? I suppose the line is more blurry in art.

As an example I'll show you one of my practice pieces. I very rarely post them and they always end up in the trash, there are dozens, even hundreds every year and I really don't see the point in keeping them. But then I see stuff in museums and galleries that kind of remind me of that and I can't help but wonder if I am not being a big snob after all? 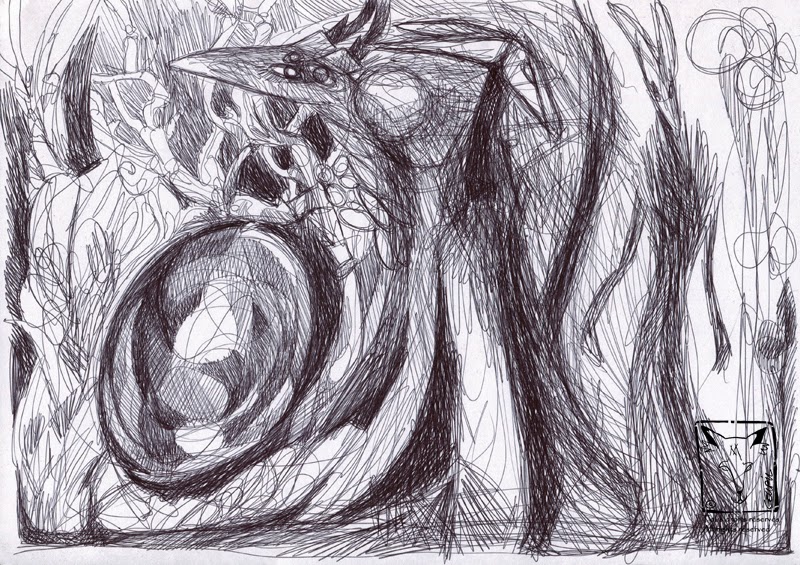 Nightly scribbles, it's how I acquire and try to fix a "style" : reflexes and automatisms that I'll use in finished pieces later. You need to do hundreds if not thousands so it's a part of yourself, at least that's how I do it

Who am I to judge after all? I'm always saying that it's what others say and think that matters not what I think. I think while I work then I let go and let others react, that's the whole point for me.
It's the old anecdote of Pandit Ravi Shankar getting so upset when people would applaud the tuning of his instrument. Sure it show a lack of understanding, but is it really that important? Is it no very pretentious to decide when people need to applause or not? I get annoyed at concerts when people do but what if they want to? Maybe to the layman, the tuning of such a complex instrument is a feat in itself? I sure couldn't do that!
I get annoyed when people praise things I consider as obvious for having practised them for years, but maybe it's the same to them? I shouldn't be so judgemental.

I don't want to turn into an old snob and not let people enjoy what they like. But I'll probably still throw away all my practice pieces. It's a thought I often have. I see books published about artists and I see their files (we have some of these at work) and I shudder to think that maybe someone will have to sort though the tons of papers I may leave behind, and the thing considered as "sacred" (inalienable) what a nightmare for the poor registrars. I doubt my stuff will ever end up in a museum but I'd rather be safe than sorry!